The 115th issue of ProcessWire Weekly brings in all the latest news from the ProcessWire community. Modules, sites, and more. Read on!

This has been an amazing week and we're once again happy to share the latest news with you folks. The highlights of the week are a new Markup module by @flydev, some pretty awesome core updates by Ryan, and two extremely detailed and helpful tutorials by Ben Byford and Francesco Schwarz – both geared towards ProcessWire beginners.

Regarding those tutorials, it's also pretty great to see that we're getting noticed in what one might describe as web design / development mainstream media: one of them was published by Tuts+, the other at Smashing Magazine. Can't get much bigger than that!

Last week we introduced the concept of paginated Fieldtypes, something that Ryan has been working on behind the scenes to make some of our fieldtypes scale way beyond what they've been able to scale until now. This week these updates have made their way to the core, though their impact is still pretty low for most users.

If you're using the Table Fieldtype from the commercial ProFields package, you can now give the latest beta version, v14, a try. This version adds support for pagination, sorting, and filtering – essentially allowing it to work nicely with any number of rows.

ProFields Table is the first Fieldtype to make use of the new pagination features, which means that most users probably won't see their effects quite yet. In the future we'll be adding pagination support to more core modules, so stay tuned for that.

When can we expect a new stable release of ProcessWire?

In his weekly blog post Ryan addresses a question that gets asked every now and then: when will a stable 3.0 version of ProcessWire come out? The brief answer is that there's still no solid time frame for this, but technically 3.0 is already "ready", and will most likely be released very soon.

As you folks probably already know, our current development versions 3.0 and 2.8 are practically speaking identical, the only difference being that 3.0 includes namespaces and 2.8 doesn't. For this reason they are likely to be released at the same time, which makes this our very first double release.

In the meantime please feel free to give the devns branch or the pw28 repository a try if you'd like to get an early look into our upcoming stable releases. For more details about the latest core updates, our future plans, and more please check out Ryan's latest post at the processwire.com blog!

Spam is a common nuisance for website admins, and most of you are probably familiar with captchas – those pesky little inputs that ever so often ask you what a particularly unreadable word, or a pair of words, really says. For a long time captchas were the de facto standard approach to combating contact form spam on the web.

The downside of captchas is that, in addition to being quite obtrusive, they pose some serious usability issues. This is why Google decided to reinvent the whole concept with their own reCAPTCHA service, resulting in a modern alternative that simply asks you to check a box if you're human – and what's even better, it actually works!

Markup Google reCAPTCHA makes integrating reCAPTCHA to your own forms, whether they were built with native elements and the API or plain HTML markup, a trivial task. Configuring the module requires a free API key for the reCAPTCHA service, but actually using it is often as simple as embedding a couple of lines of code into a template file.

Check out the README file at GitHub for more details or grab the module directly from the modules directory. For questions and general support, please visit the dedicated Markup Google reCAPTCHA support thread at our support forum.

Big thanks to @flydev for sharing this module with us!

Here we've got a new collection of support forum highlights and other useful and/or interesting resources. As always please let us know if there's anything important we've missed so that we can include it in one of our future issues.

Site of the week: The Eats and Sweets Essay Contest 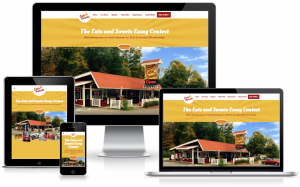 This is not charity, though: the minimum entry fee for the contest is $150 for an essay of 200 words, with the option of spending more for a chance to submit a longer essay. Still, that's a pretty good deal, especially for the winner. If you'd like to hear more about the contest, check out the Eats and Sweets Essay Contest FAQs page.

This site is powered by version 2.6 of ProcessWire and includes a bunch of third party modules, such as Fieldtype Star Rating, Process Page Field Select, ListerPro, ProFields, and Fieldtype Range Slider. For more details about the implementation we'd suggest contacting the designer and developer behind the site, Joshua Gatcke of 99Lime.

The site itself is relatively simple, but does still have some pretty neat visuals, a bunch of animations, and a particularly refined tool for submitting contest entries. According to Joshua, the client was deeply involved with creating and adding the content for the site – a feat made possible in part by ProcessWire.

Thanks to Joshua for sharing this site with us – it's definitely a great site and the story behind it is quite intriguing to say the least. We hope that the contest results in many awesome entries and that Eats and Sweets finds a happy new owner!

That's it for the 115th issue of ProcessWire Weekly. We'll be back with more news, updates, and content Saturday, 30th of July. As always, ProcessWire newsletter subscribers will get our updates a few days later.