In the 255th issue of ProcessWire Weekly we're going to take a closer look at ProcessWire 3.0.128, a new third party module called Access By Query String, and introduce a really interesting new site of the week. Read on!

Welcome back to the latest issue of ProcessWire Weekly – hope you've had a great weekend so far. This week we'll walk you through the latest updates introduced in ProcessWire 3.0.128, which is the latest version available via the dev branch.

We're also going to take a closer look at a brand new third party module called Access By Query String, and – as always – we're going to introduce a new site of the week.

We've continued working through the GitHub issue list, and as of this writing we're down to 77 open issues – which, in case you haven't been keeping track of our issue numbers, is a major drop from just a month ago. Based on some GitHub search magic it seems that nearly one hundred issues have been closed this month alone. Not bad, right?

In his weekly update Ryan mentions that Processwire 3.0.128, which is the latest version available via the dev branch, contains 40 commits over the previous version, 3.0.127. Here's a brief summary of what's new or changed since last week's core updates:

Additionally an issue where 100+ character URLs were causing 404's, accidentally introduced a couple of dev versions ago, has now been resolved. If you're using ProcessWire 3.0.125+ (dev), it's probably a good idea to update to 3.0.128 to avoid surprises in this regard.

In case you're interested in the nitty-gritty details, feel free to check out the GitHub commit log from the past week. As Ryan mentions in his post, we'll continue working through the issues list next week as well, but there are also some ProMailer updates coming up!

Access By Query String is a brand new module from Robin Sallis. This module makes it possible to deny access to your site – or some specific part of it – for everyone else except for those accessing it with the GET parameter "access" and a predefined key.

Said keys are defined via module settings, and for each one you can specify a selector to choose the pages accessible using only that specific key:

The example above would only allow access to pages using the "blog" template when the user provides GET param ?access=some-secret-string. Superusers, of course, are not affected by this sort of access restriction, but anyone else needs the key or it's a no-go. In case the user doesn't provide valid key, you can either show a predefined message (default value being "website coming soon"), or throw a 404.

This module has a number of interesting use cases, but originally it was built to allow early access to some users to a site, or a site feature, still being worked on. While you shouldn't use this module to replace proper authentication feature, you can pretty much use it for any purpose where key-based "secret URLs" are needed.

Big thanks to Robin for yet another really useful module release. Awesome idea, and great implementation as always!

Site of the week: Werkplaats walter 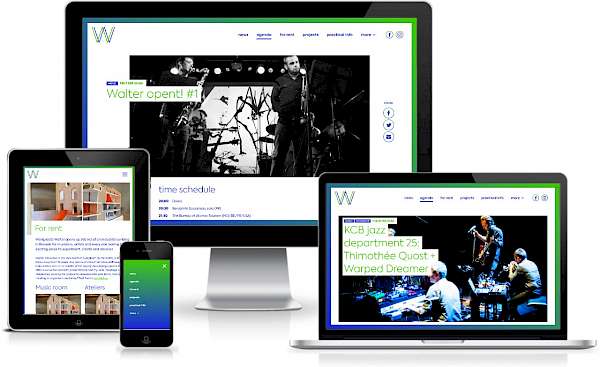 Werkplaats walter is undoubtedly one of our stranger, and more artistic, sites of the week – which seems reasonable considering that Walter is a Belgian venue for experimental music and avant-garde art. The mission statement explains that they invite both local and international visual artists and musicians in, offer workshop and rehearsal spaces, as well as possibility for residency and a concert hall.

The Werkplaats walter website, developed by Just goe, consists of a number of regular content pages, an events calendar, and project pages – including a project archive for past projects. The typography and visual style of the site have certain in-your-face, borderline psychedelic feel to them, and various transitions and animations are used to further liven up the site. Overall this is a visually striking and opinionated site that most users will probably feel pretty strongly about.

The site scales nicely to different screen sizes, and performs really nicely as well. There's a very neat, seamlessly embedded MailChimp email form at the footer of the site, and the front-end is apparently powered by the Bootstrap front-end framework. There are no visible third party modules on the site, and although there are some clues of the popular Admin on Steroids module being in action here, we could actually be wrong about that as well.

Congratulations to werkplaats Walter for their new, ProcesWire powered website, and big thanks to the folks at Just goe for sharing this project with us – this site is really nice work, and provides a refreshingly different approach to web design!

That's it for the 255th issue of ProcessWire Weekly. We'll be back with more news, updates, and content Saturday, 6th of April. As always, ProcessWire newsletter subscribers will get our updates a few days later.