In the 284th issue of ProcessWire Weekly we're going to take a quick look at the latest core updates, introduce a new module called InputfieldFloatRange, and continue our ongoing poll series #processwireworks. Read on!

Welcome to the latest issue of ProcessWire Weekly! Hope you've had a great week and weekend so far. As you've probably noticed in case you're reading this at weekly.pw, this week's issue was released a day late – that's due to some unforeseen scheduling issues, and we're sorry for any inconvenience. We'll be back to our regular schedule next week.

Anyway, in this issue we're going to check out the latest core updates; this week there's no new core version, so this involves walking through the commit log for the past week or so. In other news we're going to introduce a newly released inputfield module called InputfieldFloatRange, and include a new weekly poll – as well as the results from last week's poll – in our #processwireworks series.

Finally, we're going to showcase a new site of the week called siebennull.com, which is the one-pager portfolio of Marc Hinse, aka MadeMyDay. This is the latest version of the site, released way back, but it was just added to our sites directory – and despite being a few years old already, it looks every bit as awesome today as it did back then.

On a loosely related note: last week we talked a bit about the Concatenate Conference 2019. For those interested in that kind of stuff, you can now also find the Oct 15th video from YouTube, and @ianbrayoniist has compiled a handy list of talks and related links.

After last week's big release of ProcessWire 3.0.142 and FormBuilder v40 along with it, this week we're back to doing some routine maintenance while also preparing for our next release, 3.0.143. This week's core commits consist mainly of fixes to issues raised at GitHub, but also add some minor new features.

Here's a summary of the core updates from the past week:

There were also various improvements for PHPDoc comments in core components, as well as some minor updates for ProcessRole (improved instructions), FileLog (additional save options), and ProcessLogger (improved output).

Overall this week's updates were not particularly major, but if you're using ProcessWire 3.0.142, it would be a good idea to update to the latest version instead, particularly in case you're also using the custom fields for field/image fields feature.

The latest addition to the ProcessWire modules directory is an inputfield module called InputfieldFloatRange, developed by Eelke Feenstra. This module provides a range slider, implemented with the HTML5 <input type="range"> element, on top of the native float inputfield found from ProcessWire.

The features provided by this module include...

While not the first range-related input for ProcessWire, InputfieldFloatRange is unique in that it makes use of the native HTML5 range input, and has no third party JavaScript dependencies. As it's built on top of a native browser feature, it's likely to work mostly consistently in browsers that provide support for this type of input – which (currently) means anything above IE 10, with the single exception of Opera Mini.

Big thanks to Eelke for building this module and sharing it with us – it's a very nice contribution, and we're sure it'll find its way into many projects in the future!

Weekly poll: how much of your work is, directly or indirectly, related to ProcessWire? (#processwireworks)

Your answer can include activities that are directly or indirectly related to ProcessWire: while "directly" might only mean developing sites or apps with ProcessWire, "indirectly" could also include maintaining an environment for hosting ProcessWire sites, providing customer support, or perhaps designing content to be implemented on ProcessWire.

As always we'd be thrilled if you could answer the poll, as it helps us better understand the user base that ProcessWire has, and particularly how it's used by professionals as a part of their everyday workflow. In case you'd like to further explain your answer here, feel free to also drop a note via our feedback form, or submit a comment on this post.

Regarding our last week's poll where we asked about being self-employed vs. working for someone else, the current results (we're leaving that poll open, so you can still add your vote if you haven't done so yet) are leaning towards self-employment. The majority of ProcessWire professionals work as freelancers, a fourth or so are employed by a company, while one in ten have their own businesses where they employ others.

Below you'll find a pie chart of the full results, and the specific numbers for each group. If we were to draw any conclusions of the data we have so far, at this point we'd say that a typical ProcessWire developer is a freelancer working remotely with their own clients – but let's see how that picture evolves as we continue to poll this topic :)

Feel free to check out the poll archive for results of our earlier polls. All suggestions for future polls are more than welcome too. Thanks in advance for both your answer here and any additional suggestions or feedback you might have.

Site of the week: siebennull.com 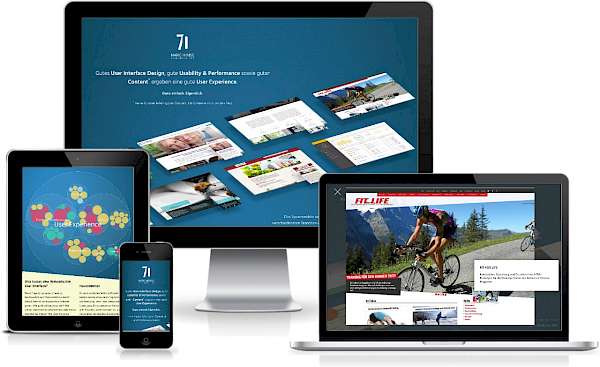 Our latest site of the week is siebennull.com, the one-pager portfolio website of Marc Hinse, a freelance designer/developer from Karlsruhe, Germany. In addition to his amazing client work Marc has also written a number of interesting articles, including one about choosing ProcessWire over MODX – a post that made some ripples when it was released, and has since then been mentioned by a number of former MODX users who've transitioned into our community.

Now, current iteration of siebennull.com has been online for quite a while already, but still looks fresh. As a one-pager it also managers to pack plenty of content on just a single view: there are portfolio items presented as a custom gallery feature with plenty of detail about each individual item, there's a D3.js powered "tag cloud" type skills section, and there are – of course – various bits and pieces of information about who Marc is, and what he can do for his clients.

In addition to D3.js, some of the tech choices behind the site include jQuery 3 and Hammer.js used for implementing gesture support. The gallery feature at the top of the site was custom-built, and on the CSS side the site apparently makes use of Jeet Grid System. That's all we have for now – in case you'd like to learn more about this site, be sure to drop a note for Marc at the showcase forum.

Big thanks for Marc for sharing this site with us, and of course for all your ProcessWire related work. We're happy to have you around :)

That's all for the 284th issue of ProcessWire Weekly. We'll be back with more news, updates, and content Saturday, 26th of October. As always, ProcessWire newsletter subscribers will get our updates a few days later.