In the 387th issue of ProcessWire Weekly we're going to check out a couple of third party modules — one new and one with major updates — as well as the latest core updates. Read on!

Welcome to the latest issue of ProcessWire Weekly. In this issue we're going to dig into a couple of third party modules: Repeater Easy Sort, which is an all-new addition, and IndieAuth, which is an existing module from 2016 with a new (and major) release.

In other news we're of course going to check out the latest dev branch updates, which contain further refactorings in tracks of the updates from the past couple of weeks, as well as introduce a brand new site of the week: On The Record, built by millipedia.

This week's core updates were introduced in a forum post from Ryan. To sum them up, they're a continuation for the big refactorings from couple of past weeks: adjustments and updates to existing code, and removal of parts now rendered obsolete.

While this week's version doesn't include many notable features, it's always nice to see the core evolve. According to Ryan, the updates discussed here are going to bring long term benefits in terms of performance and maintainability. One short term benefit is that it's now possible to programmatically identify the "closest matching page" if the request results in a 404:

In addition to aforementioned continued refactoring efforts, this week's commits also include a couple of minor unrelated fixes and improvements. These updates include support for newline characters in string translations and a fix for Page Autocomplete when used with recently introduced, three character selector operators.

That's all for our core updates section this week. For more details be sure to check out the weekly update from Ryan, and feel free to browse the weekly dev branch commit log as well. Thanks!

Repeater Easy Sort is a brand new module from Robin Sallis. In a nutshell this module was built as a helper for sorting Repeater items when there are a lot of them — so that they fill more than the height of the screen — in which case simply dragging and dropping them on the default GUI gets kind of tricky.

The module adds a new "easy-sort mode" button to each item, which in turn converts the default list layout into a column layout, where individual are much smaller (note: minimum and maximum widths are configurable) and thus much easier to reorganize.

As an addition to the easy-sort mode feature this module also adds item color settings for Repeater Matrix items. Once defined said colors are used in item headers as well as the "add new" links at the bottom. This is a very nice enhancement and helps quickly identify the type of each item, especially in case there are a lot of them.

You can install this module via the built-in module installer, or clone or download it from the Repeater Easy Sort GitHub repository for manual installation. Big thanks to Robin for sharing this module with us!

While this module has technically been around since 2016, and was introduced once already in the 97th issue of ProcessWire Weekly, the latest iteration of the IndieAuth module from gRegor Morrill definitely deserves a second look.

The IndieAuth protocol is described as "the oAuth for the open web", and you can find the full spec for it from indieauth.net. The IndieAuth module is an implementation of said protocol, and lets you sign in to applications using your domain name, as well as grant them access to read/write to your site.

What sets this version of the module apart from the 2016 version is that the old module only allowed you to log in to your own site. As module author gRegor explains in the forum thread, this version was built to handle a couple of related tasks:

In addition, the module lets you browse the applications you've granted access, revoke individual tokens, configure expiration for new tokens, and more. All in all IndieAuth is very interesting concept, and from what we've seen so far, this module is a very nice implementation of it on top of ProcessWire.

For more details be sure to visit the IndieAuth module support forum thread. While this module is not yet available via the module's directory, you can give it a spin by cloning or downloading the source code from the IndieAuth GitHub repository.

Big thanks to gRegor for sharing this very interesting module with us!

Site of the week: On The Record 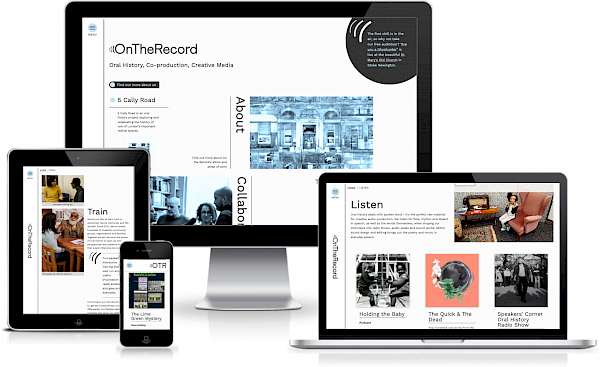 Our latest site is that of On The Record — a London based not-for-profit specialising in oral histories and creative media. Founded in 2012, OTR records people's experiences and tells their stories, exploring places, communities, and movements from multiple perspectives.

Our projects often bring together different generations or groups of people who have something to learn from each other, to connect ‘what has happened’ with ‘what could be’.

The On The Record website was recently introduced in a case story by the developers behind the project, millipedia. The site consists of informal content, written stories, as well as recorded audio and video, combined with an interesting and great looking site layout. Here the content is definitely top-notch, so that alone is a very good reason to take a closer look at the On The Record website.

As for some behind the scenes details, from the case story we know that the front-end of this site was largely custom built, with components from existing tools, such as the grid of the Bootstrap front-end framework. On the module front this site makes use of at least a few familiar ones: ProCache, LoginPersist, and ProcessDocumention.

For more details be sure to check out the case story, as well as the On The Record site itself. Our congratulations to both the team behind OTR, as well as millipedia, for this brilliant website. What a fantastic project, and great work from everyone involved for bringing it to life on the web!

That's all for the 387th issue of ProcessWire Weekly. We'll be back with more news, updates, and content Saturday, 16th of October. As always, ProcessWire newsletter subscribers will get our updates a few days later.