In 439th issue of ProcessWire Weekly we're going to check out the latest core updates, introduce a new module called TextformatterSoftBreaks, and more. Read on!

Welcome to the latest issue of ProcessWire Weekly. In this week's issue we are going to walk you through the latest core updates, which include both admin (GUI) updates and new API features, and check out the latest version of the User Activity Pro module.

In other news we're going to cover a brand new third party textformatter module called TextformatterSoftBreaks, and last but not least take a quick peek into a site of the week built by Vitec Avoine for the Finnish organization Raita ry: Tietokirstu - Dräktskrin.

ProcessWire 3.0.206 and a new version of the User Activity module

The latest weekly update from Ryan covers two topics: a new version of the Pro module User Activity, and ProcessWire version 3.0.206 (dev). We'll discuss both topics briefly here, but you can find more details from the update post.

In comparison to version 3.0.205, ProcessWire 3.0.206 contains various improvements to $pages->findRaw(), adds a memory limit to system installer, and also adds a couple of handy new features for developers:

The latest update to land in the core fixes a rare but rather annoying issue, where login failed due to an expired CSRF token because the login form was open too long before credentials were filled in. As of 3.0.206 the form is now automatically refreshed every five minutes to keep the token from going stale.

That's it for our core updates section this week. For more details about aforementioned updates, as well as some news about a new stable version of the core, be sure to check out the weekly update at the processwire.com blog. Thanks!

TextformatterRockSoftbreaks is a new module from Bernhard Baumrock, and quite likely one of the smallest and simplest modules we've featured so far with ~20 lines of code, but it can help with a common — and annoying — issue: long texts on small screens.

In a nutshell TextformatterRockSoftbreaks finds and replaces "---" within the text with a zero width space, and "--" with a soft hyphen to signal where a word should be split by the browser. This is an easy way to solve various hyphenation issues where the native hyphenation support in browser level would not work, or could create weird results.

For more details and full source code, check out the TextformatterRockSoftbreaks support forum thread. Thanks to Bernhard for developing this handy little helper module and sharing it with us! 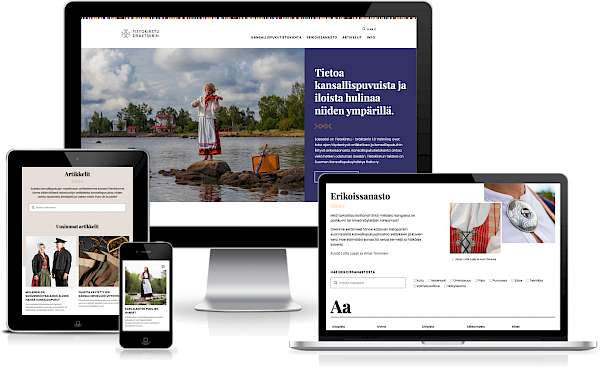 Our latest site of the week is called Tietokirstu, which roughly translates to "chest of information".

Tietokirstu is a project that documents and introduces national costumes used in Finland, covering the costumes, related vocabulary, literature, and many other topics. The project is managed by Suomen kansallispukuyhdistys Raita ry, and their newly launched website was designed and developed by the team at Vitec Avoine.

The design of this site is beautiful, clean and modern, while the main attractions of the site — which is at phase one, or version 1.0 — are an article bank and a rather extensive vocabulary database. Although there's plenty of information available here already, the goal of the project is to eventually bring a much larger database of national costumes online as Tietokirstu 2.0.

As for behind the scenes details, the front-end of this site is based on the Tailwind CSS utility-first front-end framework with a few additional JavaScript components, such as the Bartender library for accessible off-canvas bars. Third party ProcessWire modules used on the site include Wireframe, PrivacyWire, SearchEngine, Markup Metadata, as well as ever popular Pro modules ProCache and FormBuilder.

Our congratulations to the team behind this project for a job well done, as well as the client for a successful initial launch. Can't wait to see phase two of this project!

That's all for the 439th issue of ProcessWire Weekly. We'll be back with more news, updates, and content Saturday, 15th of October. As always, ProcessWire newsletter subscribers will get our updates a few days later.