51st issue of ProcessWire Weekly brings in all the latest news from the ProcessWire community. Modules, sites, and more. Read on!

This week's issue is going to be short and sweet. We're now very close to a stable 2.6 release, have a brand new site of the week to explore and have also collected some online resources for you to check out.

In other news, we're going to take one step back and introduce an earlier module that has made quite an impact on a lot of ProcessWire users. This particular module was released before our first issue, but most definitely deserves a mention here, as do some other pre-existing modules.

We'll be diving further into those in our future issues, but for now, let's get this issue of ProcessWire Weekly started!

The first, and hopefully last, release candidate (RC) version for ProcessWire 2.6 is out as of yesterday. Technically this version is still labeled as 2.5.29, but as Ryan explains in his latest blog post, it's pretty much ready to be merged into the master branch of ProcessWire, thus becoming first stable 2.6 release.

With all the changes going on behind the scenes, we've been trying to avoid any hasty decisions here. The release candidate version is an important step towards a stable release, but we'd still appreciate some last-minute testing help. Ryan has outlined some of the ways one can participate in his blog post, so we won't be going into too much detail here.

Unless we see any new show-stopper bugs during next few days, we're planning to put out the stable 2.6 release. We'd really appreciate any feedback you can give – if there's still an issue that needs to be dealt with, it's better to find it now than later.

Thanks for your time in advance!

We don't want to introduce too much new stuff in a release candidate version – that'd be just asking for trouble – but we did get one handy feature finished. In a nutshell it's an improvement to last weeks $cache updates, enabling you to specify cache expiration by a selector string, instead of just a template name or time.

This is probably best explained by an example, and the one below (borrowed from Ryan's blog post and slightly modified) is a pretty good example of where and how this new feature could be really helpful:

In addition to this, the core code has remained as it was last week, at least feature-wise. There were some minor bug fixes and a few other tweaks here and there, but that's just about it.

For more details and a bunch of handy tips to using ProcessWire with PHP's interactive shell mode, check out Ryan's weekly blog post!

This is a short list of some ProcessWire-related resources from the past week or so that we found especially interesting. Please let us know if there's anything else you can think of that deserves to be mentioned here, though!

If you're interested in real-time ProcessWire news, discussions, and updates, there are always interesting discussions going on at the support forum. Since we're only able to include a tiny selection of those in our weekly updates, head down to the forums for a lot more!

Module highlight of the week: AIOM+

All In One Minify (AIOM+ for short) is one of our all-time user favorite modules, a very popular item in the "List your 5 must have modules" thread, and mainly for those reasons the very first module published before our weekly issues started that we're taking a closer look at.

The module, currently maintained by Conclurer, was originally developed by David Karich of FlipZoom Media Inc. During the past year or so, AIOM+ has become the de facto standard way of implementing various front-end performance improvements for ProcessWire sites.

The features of this module range from combining and minimizing stylesheets, markup, and JavaScript, to more advanced features like domain sharding. Additionally AIOM+ has a very neat feature in store for all the LESS users out there: a full-featured PHP LESS parser.

Here's a little example of the module in action, just to showcase you some of the more basic features. As you can see, LESS files can be together with regular CSS files, and with automatic cache busting, the module makes working with static site assets unbelievably easy:

Our example above is really just the basic use case – these and all the additional neat features (such as conditional loading of files) are explained in much more detail at GitHub. This is one module you definitely should take a closer look at.

Huge thanks to David Karich and the guys at Conclurer for making this module and keeping it up to date – you're doing awesome work, and we really appreciate everything you've done for the ProcessWire project!

Site of the week: DOJO Werbeagentur 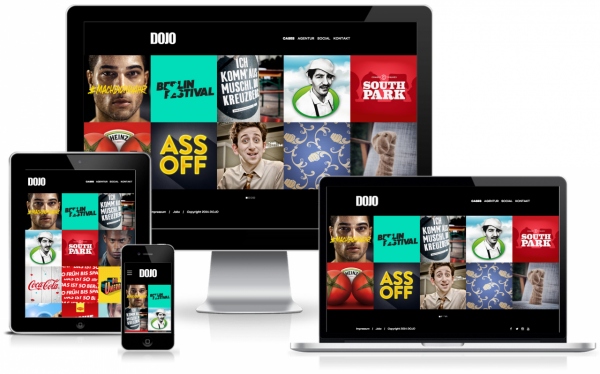 The site of DOJO Werbeagentur GmbH, built by Nico Knoll, is our choice for the site of the week this time. While the first impression may be that of a classic portfolio site with a typical tile layout, by digging just a little bit deeper one can notice all kinds of fun and quirky features that set this site apart from its competition.

What really speaks for itself is the quality of the work showcased on the site, and taking all things into consideration, it's no surprise that the folks at DOJO have worked with some of the biggest brands out there – including the likes of Coca-Cola Universal Music, Comedy Central, and Heinz.

Great talent deserves a great platform, and we're happy that, in this case, the platform powering this site is none other than ProcessWire. Congratulations to DOJO for such a great site, and thanks to Nico for building and sharing this with us – great job, everyone!

That's it for the 51st issue of ProcessWire Weekly. We'll be back with more news, updates, and content next Saturday, 9th of May. As always, ProcessWire newsletter subscribers will get our updates a few days later.