The 78th issue of ProcessWire Weekly brings in all the latest news from the ProcessWire community. Modules, sites, and more. Read on!

This week we have two modules to introduce, an impressive new site of the week, and some news about the latest core development steps. While we were hoping to see the stable version of ProcessWire 2.7 out by now too, the time just wasn't right for that yet. Anyway, more about that in the core updates section!

As always, we're happy to have you here again, and hope you enjoy our latest issue. If there's anything to improve, you have an article idea for one of our future issues, etc. please don't hesitate to drop us a line. We're always happy to receive feedback.

Now, let's get this thing started!

As explained by Ryan in the latest processwire.com blog post, there's at least one more release candidate before the stable ProcessWire 2.7 can be released. RC2 is out already, and in addition to various minor tweaks and fixes, this version also introduces a bunch of upgrades to our translation tools.

Improvements for the translations tools

The most noteworthy update this week was aimed at improving the translation tools and introduces the following new features:

Moving on to a more permissive licensing model

Another thing Ryan has explained in detail in his post is the planned license change from GPLv2 to MPL 2.0. The key points are as follows:

For most users, the license change won't actually change anything at all. For anyone interested in developing larger applications using ProcessWire as a starting point, this will open new doors, and it will also give some users peace of mind when it comes to differing interpretations of our previous license.

Hopefully we'll be seeing a stable 2.7 release next week, but until then, feel free to keep testing the development branch. For more details about the translation tool updates and the license change, don't forget to check out Ryan's latest blog post!

Textformatter Page Images, the latest module from Christoph Thelen, adds support for embedding images into textarea content using a simple tag syntax. Originally a fork of the Textformatter Image Tags module with just a few minor modifications, by now this module includes a bunch of unique features of its own.

In case you're looking for a solution that allows embedding images into text fields using tag syntax rather than enabling a full-fledged RTE, this module is worth checking out. Thanks to Christoph for sharing it with us!

If all that sounds a bit complicated, don't worry: you don't really have to worry about it at all. The whole point of Template Engine Factory, and specific Template Engines built on top of it, is abstracting and automating these things, so you can focus on building awesome stuff instead of worrying about setting up the development environment.

Thanks to Diktus for sharing this module with us – it's always good to have more options, and Jade looks like an interesting solution as far as template languages go!

Site of the week: CSDC Systems 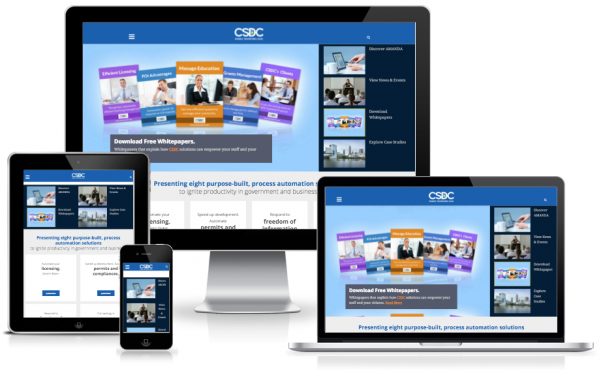 With over 26 years in the business, it's not much of a surprise that they've made some name for themselves – though in this case we're mostly interested in their new website, designed and built by Pigtail Pundits, and introduced in a recent forum post.

To begin with, the company was in need of a new site to replace their existing Drupal-based site, which – according to Unni Krishnan of the Pigtail Pundits – was "difficult to update", design-wise outdated, and had what he describes as "maintenance issues".

The new site is powered by ProcessWire, makes use of the responsive Foundation front-end framework, includes a bunch of Pro modules (such as ProCache and FormBuilder) and, according to both testing tools and some hands-on testing, feels blazing fast. The design is simple, clean, uncluttered, and has a very professional feel to it too.

For more details check out the forum post, which manages to introduce both the background and the outcome of the project: objectives of the project, challenges the team had to face, technology they ended up implementing, and the results they got out of it. Sounds like this must've been one interesting project, to say the least!

That's it for the 78th issue of ProcessWire Weekly. We'll be back with more news, updates, and content Saturday, 14th of November. As always, ProcessWire newsletter subscribers will get our updates a few days later.